by Times of Youth
in Pakistan

Times of Youth: Facebook’s grand plan to become the future of TV is coming together. Recently the company announced that it will let publishers show ad breaks in the middle of their prerecorded videos for the first time.

As a policy, the ads, which can last up to 20 seconds each break, can start after the first four minutes of the live-stream, and then reoccur at least every five minutes. “Viewers will see a counter in the corner of their screen that notifies them when you will be coming back,” says Facebook. “After the ad is over, your viewers will return to your live broadcast, and you may resume as usual.”

Once again Waqar Zaka will be setting a new trend in Pakistan as Waqar Zaka has become first Pakistani to monetize live videos on Facebook. 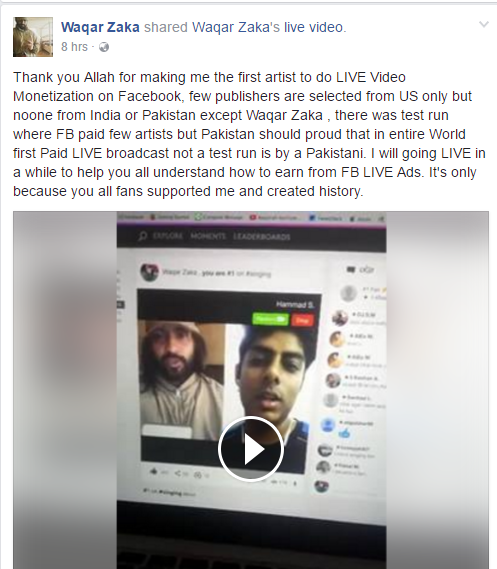 He is known for starting the trend of reality shows which includes the popular reality shows –  Living on the Edge, Xposed, King of Street Magic, Desi Kuriyan & The Cricket Challenge.

Recently Waqar Zaka’s daring journey to Syria won a lot of hearts. After his humanitarian efforts in Burma & Syria he is back again with another attempt to make Pakistan proud.

I dedicate this story to the military force of my country, Pakistan.