Share on FacebookShare on Twitter
“Our culture is so rich and it would be foolish not to throw light on it even if it’s on a lighter note. For e.g., truck art is huge in Pakistan and we’ve played with it in a song. And then there are ethnicities unique to Pakistan. But more could have been done. Perhaps in my coming films.”
-Wajahat Rauf
Times of Youth: For those who don’t know about you and your work, can you tell us a little about yourself?

Wajahat Rauf: Well, I was born and raised in Karachi, Pakistan. Got my undergraduate degree here in Karachi in Marketing from Greenwich University (then affiliated with South Eastern University, D.C.) and my Masters in Mass Communication from California State University in Fullerton, CA. I’ve been in showbiz roundabout 13 years now.

Times of Youth: What sparked your initial interest in film industry.

Wajahat Rauf: Watching Star Wars, the Superman and Rocky movies since I was 7 years old, I always had this fascination with movies. Wasn’t too late before I started making home videos and then editing them on two VCR’s (Video Cassette Recorders)

Times of Youth: The movie’s trailer has already gone viral. Tell us who named it ‘Karachi Se Lahore’ [KSL] and where was this concept derived from?

Wajahat Rauf: The road trip idea was inspired by my 2 trips to Northern Pakistan when I was 15 and the 2 dozen road trips from LA to Vegas with college buddies. We’ve seen road trip movies from Hollywood and Bollywood (India) but never a homegrown Pakistani road trip. So I built it on our local characters and exaggerated some of the experiences I’ve had in real life. The co-writer of the film Yasir Hussain rewrote almost the entire script with me and we came up with characters that are unique to Pakistan only. It should be fun for both Pakistanis all over the world and non-Pakistanis to kind of look at the country from another perspective than what we see on the news. The title ‘Karachi se Lahore’ was suggested by our co-writer Yasir Hussain.

Times of Youth: Despite of the release date being post Eid, the audiences’ eagerness regarding the movie is increasing rapidly. What do you have to say about that?

Wajahat Rauf: I am overwhelmed with the response on only a teaser and a trailer. It seems like people are really looking forward to some fresh comedy and the Pakistani road trip experience. All I can say is thank you.

Wajahat Rauf: Our protagonist Zaheem has never stood up for himself in his entire life. So when his girlfriend of 3 years tells him over the phone that she is getting married, he decides to go to Lahore with his friends to stop the wedding.  They are joined by the female lead (played by Ayesha Omer) and her bratty kid brother (played by Aashir) but to know why, you’ll have to see the movie. There is a side story featuring Javed Sheikh too, one of our living legends from the TV and film industry.

Times of Youth: This being the first Pakistani road-trip rom-com film, what difficulties were faced while filming it?

Wajahat Rauf: Actually none. We shot all over the country and not one person interfered or tried to cause hurdles. On the contrary, the crowds were excited to see the filming and assembled in an orderly manner wherever we went. We had song and dance routines that we shot from 7pm till 6am for days. I have to give it to the Pakistani people for behaving so well and genuinely being excited about the film. Our star cast would give autographs and take selfies with them. It was pretty cool.

Times of Youth: The film depicts varied aspects of Pak culture and its people. Considering the diversity, what areas required to work the most on?

Wajahat Rauf: We have 4 major ethnicities in Pakistan: Sindhi, Punjabi, Balochi and Pakhtun. Since the trip is set from Karachi (Sindh, which Is the South) to Lahore (Punjab which is towards the North), one would expect to find people from all ethnicities on a trip. We haven’t made fun of anyone but in fact played with the fact that people here are a lot of fun.

Times of Youth: On watching the teasers, the song by Ayesha Omer being an item number or ‘situational’ song is the big question everyone is asking now. Your comments?

Wajahat Rauf: Song and dance routines have been a part of Pakistani and Indian movies since the birth of movies here. We just gave it a more contemporary shooting style and energy. Both ‘performance based’ songs are situational and when you see the film, you’ll know why they were important. They are again set in comical situations.

Times of Youth: The glamorous star cast chosen for KSL is honestly impressive. How important is each one to the movie?

Wajahat Rauf: Each character is well defined and different from each other. The thing about working with good actors is that they understand your brief in no time and bring additional value to a scene. I am lucky to have worked with the cast of KSL.

Times of Youth: Being a debut director for KSL, what was the prime difference it made to the movie as compared to what seasoned directors would have made?

Wajahat Rauf: Well, I directed and produced the movie myself. There are not too many people here who have directed contemporary cinema although there are ad film makers who have excelled in their field. I think each director has his own signature and KSL will show mine.

Times of Youth: What according to you is/are the USP(s) of the movie?

Wajahat Rauf: It’s the first movie based on a Pakistani road trip and Ayesha Omer’s first movie who is immensely popular due her TV show. Fresh humour, laugh out loud situations and brilliant music add to the USPs.

Times of Youth: How did having ‘Cornetto’ as promotional partners work out for the movie?

Wajahat Rauf: Due to the small number of screens in Pakistan, making a movie is quite an nonviable proposition business-wise. So I am happy that mainstream brands like Cornetto are coming into cinema and this makes the odds a little better.  Also the brand was a good match for the genre and storyline of the film. So its not forced product placement. Plus our movies need the additional promotion.

Times of Youth: What was the total budget of the movie?

Wajahat Rauf: We just wrapped up filming this Saturday (2nd of May, 2015), so the accountants are still at it, plus post production plays a big part. We’ll know in a couple of months what we ended up spending. You can also take this as “I am not trying to reveal the budget at this time”.

Times of Youth: What lessons would be learnt by the audience on watching the movie? In other words, what would be the take-home message of this movie?

Wajahat Rauf: Friendship and love is above everything else. A softer image of Pakistan and its people.

Times of Youth: In conclusion, why should families flock the cinemas to watch KSL?

Wajahat Rauf: I think in these times of depression and suppression, it would be cool for one to be entertained thoroughly for 2 ½ hours. There is nothing vulgar in the movie, so I would encourage families to go out and have fun while watching this film.

Times of Youth: Your views about the revival of Pakistani cinema and its status now as compared to what was 5 years ago?

Wajahat Rauf: Cinema is coming back for sure. And though about 20-25 films are in the pipeline this year, true revival would be when we have film studios and film funds where anyone with a good idea will be able to make the film they’ve dreamt of making. We’re getting there slowly.

Times of Youth: What’s your top five favorite movies of all time?

Wajahat Rauf: The Shawshank Redemption’, ‘Almost Famous’, ‘The Godfather’ trilogy. I really liked the ‘Terminal’ and ‘Forrest Gump’ with Tom Hanks. Lately, ‘Inception’ was really good. In fact anything Nolan has done. And I’m a big fan of Aaron Sorkin. There is a gentleman by the name of Shoaib Mansoor here in Pakistan. Everything he has done in his career has been brilliant. His two movies ‘Khuda ke liyay’ and ‘Bol’ was what started the revival.

Times of Youth: Do filmmakers have any responsibility to culture? Do you feel that being a creative person requires that you give back something to the society, or just tell a particular story and not do anything else? Why or why not?

Wajahat Rauf: Oh definitely! Our culture is so rich and it would be foolish not to throw light on it even if it’s on a lighter note. For e.g., truck art is huge in Pakistan and we’ve played with it in a song. And then there are ethnicities unique to Pakistan. But more could have been done. Perhaps in my coming films.

Times of Youth: Who were/are your filmmaking inspirations? It could be anything which inspired you all along.

Wajahat Rauf: Mr. Shoaib Mansoor for sure. I’m a big fan of standup comedy and always try to catch a show or two when I’m abroad. Robin Williams (may he rest in peace), Chris Rock and a Pakistani comedian by the name of Saad Haroon who now lives in New York. It’s the spontaneity I guess. Personally, my father has been a big inspiration for me. So it’s a mix of all these things and more that kind of drives you to get up and do stuff. 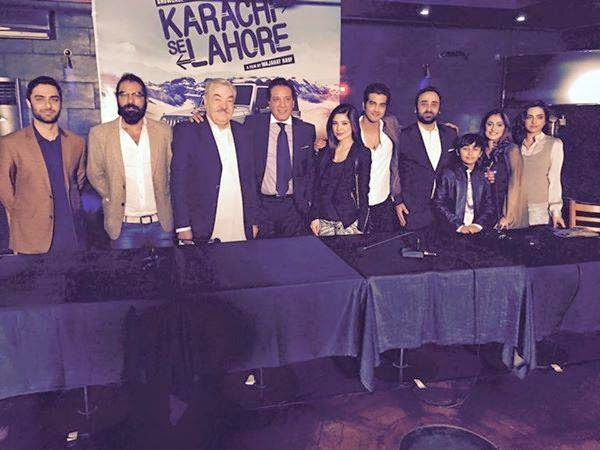 Times of Youth: How much do the film-makers have to compromise in creativity for film production owing to financial constraints?

Wajahat Rauf: TV is where we compromise. Due to unattractive budgets and fixed plots and story-lines. You can’t be too creative as the meter tells us that the audience wants to see a certain genre of content which is drama. As for films, there are no limits to creativity as there is no approving authority or a committee that tells you that you can’t make this film. Budget wise, I think what is really cool is that equipment and human resource is not that expensive here. So you could still make a decent film with an average budget.

Times of Youth: According to you, what can be done to further improvise the film industry?

Wajahat Rauf: Like I said, we need film studios. And more talent agents who would go to lengths to find good writers, actors and directors. We choose from the people we know personally but I am 100% sure there is massive talent out there that needs to be explored.

Times of Youth: Any advice you’d give to aspiring youngsters who want to enter movies now or in the future?

Wajahat Rauf: Never take no for an answer. Pursue your dream and if you’re crazy enough to follow it through, you will most definitely achieve it.

Times of Youth: Any message to fans and followers via TIMES OF YOUTH?

Wajahat Rauf: I’d like to quote a line here that was used for Steve Jobs, “People who’re crazy enough to think that they can change the world, are the ones who actually do”.