by Times of Youth
in Exclusive Interviews, Rising Stars

“It’s based upon a couple of characters from different socio-economic backgrounds, whose lives collide in a hilarious mess. together they get involved in a chain of events, which they have no control over their consequences.” – Eyad Ibrahim

Times of Youth: The movie trailer has already gone viral in the country. Please tell us who named this film & why did you name your film ‘KAMBAKHT’?

Eyad Ibrahim: KAMBAKHT was originally intended to be used only as a script name and later the movie would be released with a different title. The title relates a lot from the storyline (so you’ll have to watch the film to know why) and it’s a name that also catches your attention. Thus, it was a mutual decision to also release the film under that title by Hamza (Director) and the scriptwriters.

Times of Youth: Can you tell us about how you got started in the entertainment industry at such young age and why?

Eyad Ibrahim: I started through theatre plays (also on the production side), and is mostly a freelancer since then have worked in various areas of this industry. It’s been a good 5-year journey from then to producing a feature film, which is something I’ve always wanted to do. I think the drive for a sense of achievement is what always pushed me out of my comfort zone.

Eyad Ibrahim: “It’s based upon a couple of characters from different socio-economic backgrounds, whose lives collide in a hilarious mess. together they get involved in a chain of events, which they have no control over their consequences.”

Times of Youth: Why was this particular star cast chosen for ‘ KAMBAKHT ‘? How important are they to the movie?

Eyad Ibrahim: Whichever actors are in the film are there because they could represent and play those characters perfectly. We have an incredibly talented cast, some big, well-established names and some startup actors, and they all are very important to the movie. 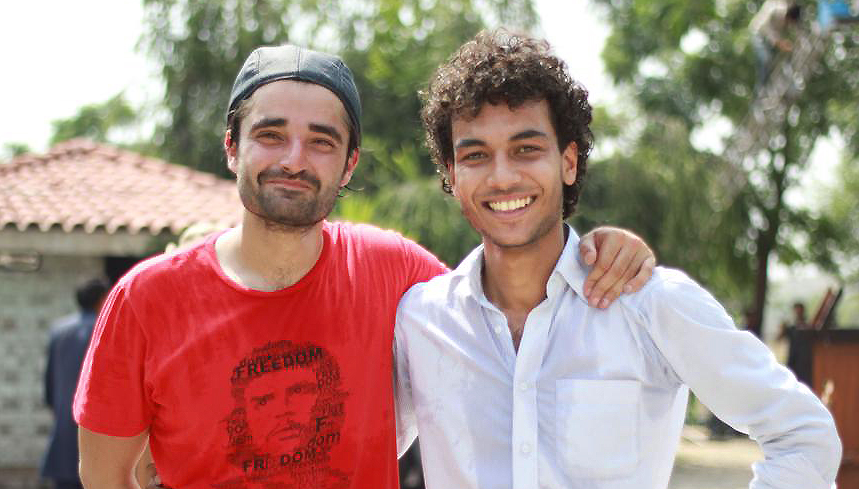 Times of Youth: We heard that the ‘dharnas’ and political rallies for PTI and Imran Khan delayed the movie’s production earlier. How did that affect the movie and its budget? Do you feel it was worth it?

Eyad Ibrahim: Well, the ‘dharnas’ weren’t something anyone anticipated, and while it did affect the ongoing production process of the film, yet we did a lot of damage control. I never rush into or just get-done-with anything I do. It has to be done right, and production value isn’t something I’d compromise on. So yes, I think it will be worth it when it releases.

Times of Youth: What was the overall budget for your film? Sorry, we couldn’t resist asking.

Eyad Ibrahim: Well I don’t like talking figures, but it will be a surprise for many.

Times of Youth: How do you feel about the increasing popularity of ‘ KAMBAKHT ‘ despite the release date still being chalked out?

Eyad Ibrahim: I feel that we are providing the audience with something they are really looking forward to, and it increases our confidence knowing that we have an ever-growing target market for the film.

Times of Youth: Are there any particular things you learned from this project, both the positives and negatives?

Eyad Ibrahim: “Peculiar” – well not really; it was a smooth production, though we did have to go out of our way, majorly at times to accommodate certain matters, but nothing really peculiar no! I can look back at it and say it was a very positive experience.

Times of Youth: What’re your top five favorite movies of all time?

Eyad Ibrahim: My top 5 keep on changing every now and then. Some all-time favorites are American History X, Legends of the Fall, The Godfather, Perfume.. but that’s only some!

Times of Youth: According to you what’s the difference between director and producer?

Eyad Ibrahim: The director creates the idea, story while the producer executes it, makes it happen!

Times of Youth: Comment about the revival of Pakistani cinema and its status now as compared to what was 5 years ago.

Eyad Ibrahim: Well it’s status and the number of films coming out definitely has increased, and now there is a substantial market for films. While it’s still not a balanced or perfect market but it’s a starting ground that offers a lot of potentials.

Times of Youth: How much do you think commerce affects art? In other words, how much do you have to compromise in creativity as a producer because of financial restrictions?

Eyad Ibrahim: Well, it’s all about the budget, the bigger budget you have, the more resources and means you have of doing justice to the script and creative idea behind it. But then again it depends on your production team, and how efficient they are. I have seen and worked on a lot of low budget music videos, ads etc, and there is always a way to maintain the quality and creativity of the project. But it’s very taxing and hard to go about it, which is why producers prefer to work on high-budget projects.

Times of Youth: If there would be something/s which you think would make the film industry better, what would it be?

Eyad Ibrahim: Introduction of copyright laws and the system of royalties for artists. That’s the least and foremost that could be done in the film industry.

Times of Youth: What would you tell someone very young who wish to become a producer now or in the future?

Eyad Ibrahim: That they should get out there and expose themselves as much as they can. Nothing teaches you better than experience and exposure.

Times of Youth: If there someone reading this interview happens to be a talented actor or director, how would they contact you about the possibility of working together?

Times of Youth: What’s next for Eyad Ibrahim?

Eyad Ibrahim: I see myself working on a lot of smaller projects as compared to KAMBAKHT, mostly music videos. I recently worked as an Assistant Director for music videos of Quratulain Baloch and Adil Omar, and I see a lot that I could do in that field too. I think representing and upholding the arts is what I really always liked doing, be it any work area or medium.

Times of Youth: Any message to your fans and followers via Times Of Youth?

Up Close and Artsy with Lara Zankoul