by Times of Youth
in Featured Interviews, Prodigy

Share on FacebookShare on Twitter
I often say that art is the only aspect of my life that defines who I am. Without art, I’m nothing. It dictates nearly every element of my life, what I do, how I do it, and why.
-Andrew Salgado

I’m 32, half-Mexican, born and raised in Canada, trained with a BFA in Canada and an MFA at Chelsea College in London. In the shortest sense, I’m a figurative painter with a fairly abstract bent. I’ve lived in East London for the past 8 years; now, its home.

Times of Youth: What does art mean to Andrew Salgado?

I often say that art is the only aspect of my life that defines who I am. Without art, I’m nothing. It dictates nearly every element of my life, what I do, how I do it, and why.

Times of Youth: When did you realize that being an artist was your calling?

I think I have always known that I’d be in the creative sphere. As a young kid I avoided sports in favor of taking art classes from the local creative community. I was fortunate in that I had a lot of support in this regard; my neighbor was a celebrated watercolorist who first taught me how to paint; I had excellent tutelage throughout my teens and also in young adulthood. However, it was a seminal high-school teacher who really made me focus on my talents and push me into art as a career choice – believe me, this is not an easy career-path. When I began university my parents forced me into Science, but after the first semester I gave the ultimatum, either I go into Fine Art, or I drop out. That was an easy decision and I was fortunate that they supported me through my first degree.

Times of Youth: Who are your favorite classic artists, and how did they influence your career path?

I believe in what I almost call a historical flat-lining of art history. In the sense that I think one can be equally inspired by totally (seemingly) disparate artists, modes, and eras. Off the top of my head, favorites are Bacon and (Daniel) Richter (Gerhard does little for me). But who cannot find themselves in awe of DaVinci. The Florentine Renaissance makes my knees weak. I also love Veronese, Vermeer, Caravaggio and Zurbaran and Ribero. The Byzantine period captivates me – those flattened faces and aggressive lines. I mean, realistically the list goes on and on, so could be quite silly for me to tell you all of my influeces. However, today I often look to Condo, Ghenie, Cecily Brown, Justin Mortimer, and even more contemporary peers, like Dale Adcock who is a genius in his own right and has become a very good friend. I own a huge painting by Dale and I think it resonates with the same incomprehensibly mystery and mastery, as say, the Sistine Chapel, but on a totally different level. I like to look at work that is totally dissimilar to inform my practice. I collect things, ideas, colors, pairings…I keep them in my head or as visual aides until they materialize on canvas. Sometimes this happens months or even years later. Actually, just this morning I re-stretched a painting from 2012 for a collector and noted how the background on that piece was a precursor to the background on a painting I’m working on now for a solo outing at VOLTA BASEL this June with my gallery, Beers London. I think as an artist we need to constantly consume. It is tiresome, but my eyes are hungry. I never stop. I once met an artist asking for help and I told him to digest everything visually; he told me he didn’t want to look at other artists because his style was totally unique to him. I couldn’t help my outburst – I told him that was the stupidest thing I’d ever heard. Picasso himself said it best – good artists borrow, but great artists steal. There’s nothing new, we’re only paraphrasing and reorganizing what has already been said, but the real talent is translating it in a manner that makes it look unquestionably fresh. I mean, there’s only so many words in the arsenal of the English language, but a strong author can still stop you in your tracks and make you go “wow, how did he write that?” 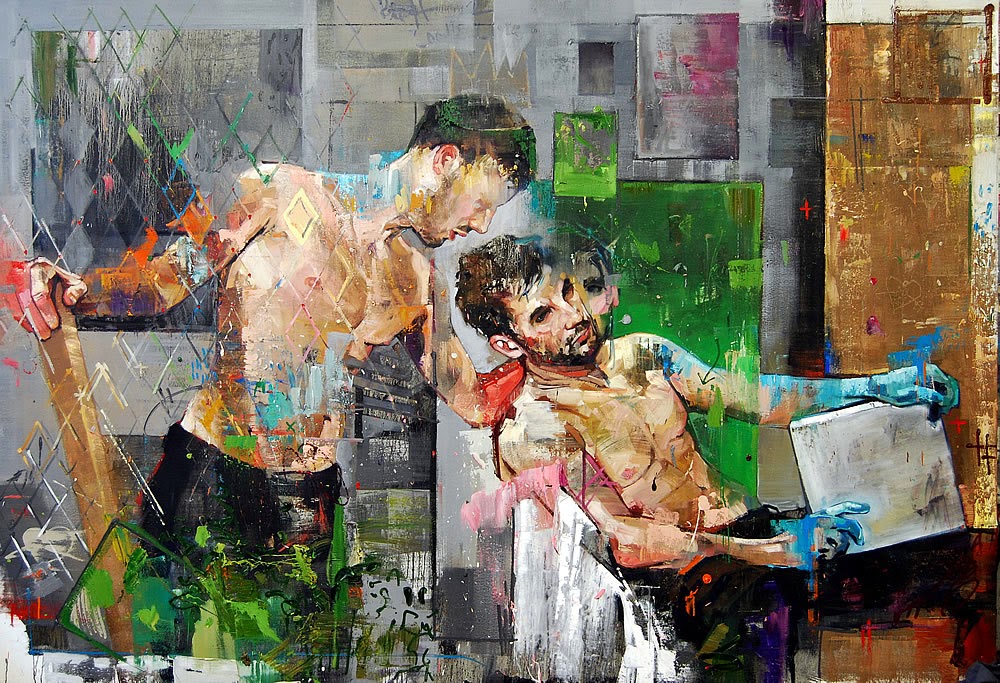 Times of Youth: How would you describe your style?

Never as portraiture. That’s the worst. A portrait is a one-dimensional representation of a subject that aims for likeness as its primary goal. To be totally honest, I don’t really care if my painting looks nothing like the subject. I like this idea that there are things brewing beneath the surface of the picture plane; these extra meanings that occur when the sutures of the canvas are ripped apart. I think that’s why I like painting people I don’t know – strangers. My process of painting them is exploratory. I often compare it to vampirism, its selfish, I take what I need from them and toss them aside. But ultimately how I paint is intensely personal, almost masturbatory. Don’t come into my studio while I’m working because this process of accident, chaos, crisis, and finally self-revelation and resolution has to occur. It can be a long, and difficult process, but I fundamentally believe in change, experimentation, and risk as formative aspects of my practice. But back to the first question: in short, I call myself an abstract figurative painter. It leaves it up for interpretation.

Times of Youth: Of all your solo exhibitions so far, which one has been the most memorable?

I think as young, working artists, its important to define yourself with the art you are doing now. I am not the artist I was in 2012, or 2013, even. I’m already growing from who I was in 2014. I’m who I am now, and as such, my most relevant work should always be the work I’m currently working on. If its not, I’m not pushing myself hard enough. I have no time for artists who don’t aspire to better themselves. And believe me, there are a lot of one-trick ponies out there. I think the peers catch on first, and eventually, the buyers and critics. My favorite young artists are the ones that make me think; that shock and scare me. That leave me feeling perplexed, perhaps unsure. I don’t want my thoughts to be confirmed and I don’t want to confirm anyone else’s – I want each body of work to have an element of surprise, for both me and my viewer.

Times of Youth: Tell us more about your upcoming solo exhibitions, especially ‘Youth In Trouble’.

The body of work I’m currently working on is ‘This is Not the Way to Disneyland’ which, as mentioned, will be a solo presentation at VOLTA over ART BASEL in Switzerland with Beers London. Later, in December, I will debut another new body of work, ‘Youth in Trouble’ over ART BASEL WEEK in Miami, which will be accompanied by a monograph of the same name, cataloguing my work and practice to date. I think I’ve gone a bit more pop, I don’t know. Something feels very strangely colorful. I don’t like to talk about it too much because in all honesty the work is being made and I myself don’t even know where it will truly end-up. ‘This is Not the Way to Disneyland’ though, is quite dark. The title was taken from the words ostensibly spoken by the 13 year old victim of William Bonin and his four friends, all of whom were homosexual pedophile serial murderer-rapists in the 70’s who picked up a boy in Florida on his way to Disneyland, who, at one point along the journey apparently said these horrific words. But I’ve always loved the idea that something which appears to be joyful might be subversive. And as a homosexual and a victim of a hate-crime myself in 2008, my work has often dealt with ideas of misanthropy and human nature. I’ve created something for the show that I’ve dubbed the Mickey Swastika, which I find both hilarious and totally appropriate for a lot of reasons.

Times of Youth: Among your works, which one is your most favorite? Why?

Come on, that doesn’t exist. I’ll tell you which I hate: The Bewildered Pursuit. What a piece of garbage! My gallery won’t let me take it off my website because for some reason it became that piece for me. Its kinda like Van Morrison denouncing Brown Eyed Girl.

Times of Youth: Besides paintings, we heard that you’re also collaborating with RAINS, a Danish fashion house to help with their new range of luxury garments. Do tell us how did that come about and your experience.

Yes. This is super exciting. I can’t give too much away but I get asked often to collaborate with various brands, but unless it respects both my art, and the other brand, I don’t feel its right. With RAINS, it was an immediate click. I knew we could do it and do it well. You should start to see/hear a lot more about this later in the year. These things take some time. But I can promise you the designs are stunning.

Times of Youth: Did you ever expect, when you started out at first, that you’d get this far?

I’m not sure how far I am, to be honest. The accusation I hate more than any, is “well, now that you’ve made it … “ which is offensive. There’s always room to grow. I’ve been fortunate to have experienced a modicum of success at a  relatively early age. If anything, that lights the fire to continue to prove and establish my worth as an artist. There is never time to sit back and put your feet up and think “man, am I good!” That just can’t happen. And if it does, quit.

What is the first word that comes to your mind when you read the following-
Colors: Inspire
Parents: Guide
Life: London
Love: Everyone
London: Home

Times of Youth: How does it feel like to be one of the most lauded artists of today’s times?

I think that’s a gross overstatement. I would appreciate the label, but I have a long way to go. A lot to learn. Hopefully, a long future ahead of me where I actually can grow into that label. But that’s a lifelong pursuit. That doesn’t just happen at 32.

You can visit my site at www.andrewsalgado.com
Join my facebook page at www.facebook.com/andrew.salgado.artist
Or to inquire about pricing and availability, and to register interest for future work, please email info@beerslondon.com

Terrorists Don’t Have A Religion, So Stop Racism In Its Name!

Up Close and Artsy with Lara Zankoul