by Times of Youth
in Future Stars

Times of Youth: In brief, could you enlighten our readers about yourself for those who may be unaware?

A Big Hello to the readers! My name is Dr. Musstanser Tinauli. I am the CEO of Fori Mazdoori. I would like to define myself as an innovationist committed to the idea of creating sustainable, smarter and safer Cities. I believe in slow-change in a bottom-up way. You could also know me as a traveler. I travel whenever I can as I believe its is the best teacher, it teaches you, it changes you. I am very reachable and easygoing person –  I have been told often by the youth that my sessions are enlightening and highly motivating.

You put me in a room with 50 people and we would come out with several good ideas with high societal impact. I can help particularly young people think differently.  I have given several keynotes and workshops (focused on innovation. design thinking, social innovation, social entrepreneurship and smart Cities) in flagship events of the American Embassy such as Global Entrepreneurship Week and International Youth Alumni Conference as-well as with several prestigious Universities (such as Punjab University, NUST and Kinnaird College Lahore). I have also been a TEDx speaker.

One of the best projects that I have ever lead would include Trash Track at MIT – a project that made the concept of “Internet of Things” a reality and also presented the world with a scenario where 100 percent recycling was a possibility.

Times of Youth: What is the name of the startup?

The startup is named Fori Mazdoori within Pakistan, and Skill Bazaar for rest of the world.
We are available online through forimazdoori.com and skillbazaar.co (currently in beta) as well as our iOS and Android apps.

Times of Youth: What is your startup, what does it do?

Fori Mazdoori is a labour welfare system designed to transform how a person finds work. It bridges the gap between an employer and a worker by providing an easy to use ICT-based platform for searching and hiring everyday workers such as drivers, maids, electricians, and plumbers, among a host of similar blue-collar / non-formal professions. Finding the right help at the right time is a cumbersome task and considerable effort is required to track down people with the desired qualities even through existing contacts. Fori Mazdoori provides fast and easy access to potentially millions of workers through the web and mobile apps. It enables users to not only search for nearby workers but also provides a mechanism for adding new workers who do not yet have access to modern technologies (welfare). By completing the feedback loop through employer reviews and leveraging social media, Fori Mazdoori provides access to quality workers that you can trust.

We are a social enterprise registered as a private limited company and help truly empower the youth, women and the underpriviligaed communities. We are particularly a ray of hope for women wanting to find jobs through our system when their norms, culture and tradition discourages them from using the ways of men to find jobs.

Times of Youth: Who are the founders and key team members of your startup??

Fori Mazdoori is the brainchild of Dr Musstanser Tinauli, an acclaimed innovator and researcher whose core interests lie in creating sustainable, smarter, and safer communities. Dr Tinauli has been associated with various universities and research labs around the world in different capacities and has led some very high profile projects including Trash Track at Massachusetts Institute of Technology (MIT), Boston, USA. Dr. Tinauli can be followed on twitter @musstanser & facebook(mustanswer1).
At Fori Mazdoori, he is joined by his two other co-founders; Surayya Obaid, a development management specialist with years of experience in the development sector ; and Shaji Ahmed, a technology and design specialist who has led multiple large scale research and development projects in both the government and development sectors. 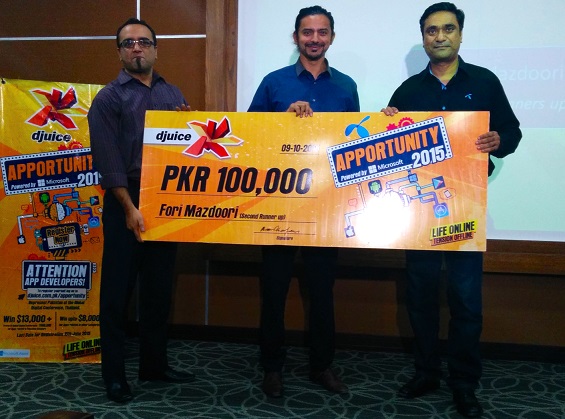 Times of Youth: How does your startup stand out against its competitors, what makes you different?

Fori Mazdoori is primirarly targeting the informal job sector. We present a model where workers do not need to be actively seeking jobs instead the onus of recruitment is always on the employer (similar to LinkedIn). The workers (with a mandatory access to a simple phone) just need to ensure their most updated profiles are available in our system.

The employers in our case are primiarily individuals or households, and not companies or head-hunters. We cater to the low-income and shot-term job market where requirements for candidates are not as stringent.

Moreover, our target audience (in case of workers) are mostly offline, do not have ready access to modern technologies (smart phones), and are not very highly educated. Their access to the system is ensured through pseudo profiling either by their employer(s) or someone they may know with a smart phone and/or internet access. We enable the workers to get incentives of using social-media by allowing our community to create and maintain their pseudo-profiles that enables them to be found, contacted, and employed. These profiles lets the world know who they are and what they can do. If and when they improve their economic status to where these individuals can afford smart phones and get online, they gain access to control their own profiles.

Strong community engagement is key to the success of Fori Mazdoori. The act of profiling a worker translates into increased employment opportunities for the workers. Our users not only feel a sense of accomplishment but are also rewarded for their contribution in generating employment in both monetary and social terms.

Times of Youth: Where did the idea for the startup come from?

Dr Tinauli is a design thinking and smart-cities specialist. The need for a potential service that could facilitate the blue-collared workers was identified in a couple of his co-creation sessions. That point onwards Dr Tinauli made it his mission to create a system that would truly empower the largely illiterate community and help them get access to better jobs.

Times of Youth: What is your vision for the company?

Fori Mazdoori believes that ICTs can be leveraged to improve the lives of billions. In the modern world, basic physiological human needs can only be met through a consistent means of employment. ICTs have the power to deliver on this need, but only if they can be harnessed in yet unimaginable ways. Fori Mazdoori is one such endeavour.

Times of Youth: What is the actual addressable market?

The directly addressable market is anyone who is online. They in-turn have access to tens if not hundreds of people who are offline but are connected through mobile devices (feature phones). Hence, anyone who can be contacted through a mobile phone can potentially be profiled.

Times of Youth: Can you state, in clear language, the key features of your product or service?

• Fori Mazdoori connects workers (help providers) with employers (help seekers) through ICT-based systems using the web and smart phone apps
• Users (employers) can search for individuals (workers, other users) with specific skillsets
• Users can create their own profiles or profiles of those individuals who are offline, but connected via feature phones
• Offline workers can now be located, contacted, and hired for any kind of work
• Employers can rate and review worker performance

Times of Youth: Where did the idea for the startup come from? What was the inspiration behind the business?

I have been focusing on the creation of smart cities and sustainable communities for about a decade now. After working on and participating in several smart-city events around the globe, I realized that a smarter world cannot subsist without a smarter Asia, and for which South Asia would have to become smarter and more sustainable.

South Asia is home to a significant portion of the world’s population as well as poverty. Access to better employment opportunities though technology could strongly contribute towards poverty alleviation, which in turn could improve their perception of what is possible through good use of technology. A connected South Asia could pave the way for a smarter and sustainable world.

Times of Youth: What is your business background, and what got you interested in startups?

I have no business background or have a history of family businesses, but as a preacher of innovation and social entrepreneurship I wanted to do something that could change the world. Startups have the power to change everything, I believe mine would too!

Times of Youth: What are the major product milestones/achievements?

Fori Mazdoori is the first-to-market and has so far received the following awards as a recognition of our innovation:
• Winners (Utility) at Apportunity 2015, Telenor, September 2015
• Best Startup at Startup Expo Islamabad, May 2015
• Top 15 Startups of Europe and Asia at Startup Istanbul, November 2014
• Runners-up of the National Innovation Grants Challenge 2014 by Pakistan Innovation Fund (PIF) in collaboration with Pakistan Poverty Alleviation Fund (PPAF)

Times of Youth: How did you initially raise funding for your company?

I was able to raise the first round of funding through the support Simula Research Labs (SRC) in Norway, where I was employed as Innovation Manager.

Times of Youth: What early traction has the company gotten (sales, traffic to the company’s website, app downloads, etc., as relevant).

We have had good early traction including 1,000+ app installs, 2,000+ registered workers, social media outreach to more than 10,000 users, and a conversion rate of about 25%.

Times of Youth: What has been your biggest challenge so far as a startup owner?

Moving to Asia after being spoiled in Europe was biggest challenge. Also I miss having a salary.

Times of Youth: What will the company look like in a year? From any and all perspectives — product, people, team, revenue?
2016 hopefully will be a big year for us. We are planning to raise some Round-A funding to continue our development and expand the outreach campaigns. Opening up the platform to other more accessible countries is also on the cards.

Times of Youth: How can investors in your idea make a profit?

We have planned for multiple revenue streams, including but not limited to transactions, advertising, and subscriptions. In some projections we also estimated profits ranging from 100-200 percent. With a lean start and low overhead, we are all set to become financially viable within a short span of time. Given the potentially large number of users and our progressive activities, it shall be nothing less than an ideal investment opportunity for investors to join us. I would like to say, “join us, and I promise together we will change the world”.

Times of Youth: Finally, if you could give one piece of advice to someone thinking about starting a business, what would it be?

Only you and you alone can make it happen –Your belief in yourself and your idea is all that you require rather than anyone’s approval. Yes, you will need a team to pull it off but your intensity of self-belief will drive the success of your idea. As an entrepreneur you need to hypothesize weather an idea will fail or fly but no projections can truly give you the end-results. The end-results would be a consequence of all the things you do once you embark on your new journey. Even if you fail in your first idea, your knowledge and experience would increase your worth and value exponentially. So, just do it! If you believe you can, “you can!”.