Committed to bringing laurels to the nation once more

by Times of Youth
in Youth

Share on FacebookShare on Twitter
NUST Formula Student Team which was formerly known as Formula NUST Racing (2012-2014) was founded back in 2012, when a group of motivated, engineering students from NUST-PNEC formed a team with the aim of representing Pakistan at the world’s largest educational motorsports competition; Formula Student UK (FS).

The FS Competition is Europe’s most coveted educational motorsport competition, run by the Institution of Mechanical Engineers (IMechE) and backed by the Industry and high profile engineers. The competition aims to inspire and develop enterprising and innovative young engineers. The challenge involves selected teams to develop prototype in one year for a single-seat race car for autocross or sprint racing, which is tested on various parameters including; cost, maintenance, reliability, performance in terms of acceleration, braking, and handling qualities. Dozens of FS alumni have progressed to Formula 1, and hundreds more are now working at the world’s largest automotive firms.

In 2012, the NUST Formula Student Team not only gained experience of taking part in a highly competitive event but also set an example for others to follow back home. The next two years at Formula Student brought some positive changes for the Team, which delivered an even better performance at the world-renowned competition by finishing in the top half and winning an award for the “Most Effective Communications Strategy”.

All the efforts and hard work of the team members would have been futile if it had not received the assistance and encouragement of people who believed in the project from the very beginning. Interactive Group became the partners of the team in 2012 and since then, have bolstered the project at every point of their Formula Student journey. In 2015, Interactive further strengthened its resolve to support the Team by becoming the title partners of the same team, which will now be known as “Interactive NUST Formula Student Team”.

In collaboration with its partner, Interactive NUST Formula Student Team aims to inspire the young generation of today by launching its “#RacingToLearn” campaign. The aim of this campaign is solely to promote excellence in learning through motorsports, which will facilitate the development in technology within the country. Under this slogan the team is conducting various programs, which includes awareness campaigns in different schools of the country about the FS competition and about motorsports and engineering in general. 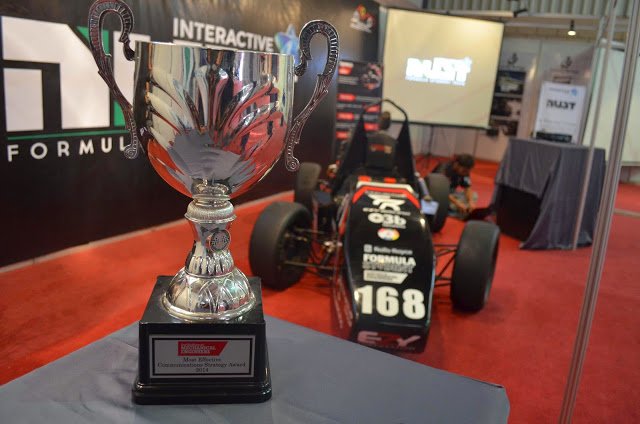 Apart from that the team is also participating in several auto-shows showcasing their student built car of 2014, to the automotive industry, and also to the general public, in order to create awareness about this great endeavor being carried out by the students of NUST – PNEC. It can be said that Interactive NUST Formula Student Team is one step closer in achieving its vision of producing the best human resource that will enable Pakistan to be at the forefront of technology by practically implementing classroom teachings into building useful skills and gaining work experience through this project.

For the year 2015 the Team aims to develop a vehicle that is safe, high performance, reliable and cost effective. This year’s design has been finalized and fabrication of the car is under way.  The Team hopes to go the extra mile this year by participating at Formula Student UK once again and Formula Student Germany for the first time. With renewed hope and dedication, Interactive NUST Formula Student is committed to bringing laurels to the nation once more.

The Real Face of Education

Too Deteremined To Be Defeated