by Times of Youth
in Heroes, News, Women

The most beautiful lady on the wheel who inspires millions around the World. If you feel demotivated & depress & now you can’t do anything, you are helpless then you must Google one name; The great Muniba Mazari. The biggest example of positive attitude, passion for life, passion for work and strongest willpower. The greatest example of courage & willpower that can even beat death & any disability! 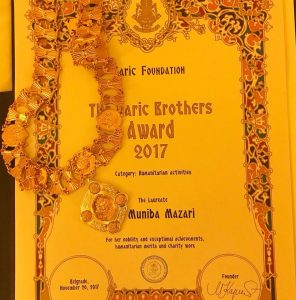 Muniba Mazari wins Karica Brother Award. The Karic Brothers Award has been established as a result of a firm belief in the inexhaustible capacity of intellect and value, primarily of our own people. Its purpose is to stimulate and motivate all those who create and produce a value that will result in more pleasant living conditions. On the occasion of the 25th Anniversary of the BK Company, the Karic family and the Karic Foundation introduced the Karic Brothers Award.

It is presented for the highest achievements in the following categories: culture and arts, scientific research work, publishing and journalism, economy and commerce, humanitarian activity in support of peace, cooperation and amity amongst people. The award is presented annually. Individuals, organizations, and institutions all have the right to propose a candidate.

The proposal should be submitted in written form to the Karic Foundation. The Executive Board decides on the laureates. A team of experts proposes to the Board three candidates in each category of whom one is subsequently chosen. The award was originally presented in 1998 and the names of its winners best attest to the justified ambition of becoming, with time, the Serbian equivalent to the Nobel Prize. 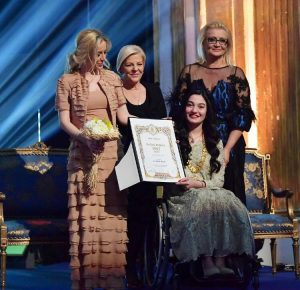 “Thank you very much Karić Foundation for acknowledging the efforts and for giving this huge honor! While I am nothing without the support of my mother, family, and friends I’ll dedicate this award to all the people of the world who suffer discrimination of any sort. To all the people who are made to believe they are lesser of a human.

Let’s hope for a tomorrow free of discrimination be it gender, racial, religious or against people with physical or mental challenges. Let’s be there for one another, let’s embrace everyone the way they are. In the end, a little more kindness and a little less judgment are all we need to make this world a better place to live. So let’s be kind and be human!” – Muniba Mazari

Iron Lady "Muniba Mazari you are three women in one body"